Surrender to Darkness has arrived~ Get to know Cade and Abagail 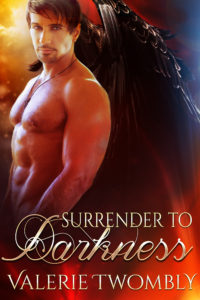 Sometimes the only choice you have is to surrender.

Cade is a fallen angel who still endeavors to follow the right path. That is until the angels’ new ruling body decide the warrior is the perfect match to carry out their new assignment. Schooling the young, snobbish Abagail in the art of demon fighting is a challenge he could do without.

When Abagail is summoned by the Tribunal, she is beyond eager to finally take her place among the angels. She already has her eye on an elite warrior for her mate. But when the nephilim is thrust into a mission with a fallen angel, she goes from thrilled to mortified.

Like oil and water, the two are constantly at odds with each other, but Cade can’t deny the attraction building for the aloof nephilim. As their mission draws to a close, Cade realizes Abby will walk out of his life and into the arms of another, unless he can convince her to surrender to one night of passion.

When Abby slipped her hand into Cade’s, he was immediately bombarded with her emotions. Fear and anger aimed directly at him––and arousal. The last one surprised the hell out of him, and before he knew it, he’d told her about sex in flight. Why? His guess was he wanted to gauge her reaction. Was he hoping she would offer?

With a grumble, he lifted into the sky and headed toward the palace. Abby’s tight, hard body pressed against him, and his own body reacted. There was no amount of thinking about baseball that was going to fix this. Distance was what he required.

Several grueling minutes later, he landed outside Lucifer’s palace and set Abby down. She quickly stepped away from him and adjusted her tee. This nephilim was a complete mystery, but one thing was for sure. She thought the fallen were beneath her. Apparently, Ms. Abagail had grown up pampered and now felt learning to kill demons would dirty her. In a way, she was right. No one was ever the same after they took their first life. Not even an angel.

He warred with himself. Part of him wanted to tuck her up on a pedestal where she would never have to deal with the filth of their world. But the other half knew she had to be able to protect herself. The new Tribunal was right about that. No one knew what the future held, and Lucifer still hadn’t been located. Then there was Logan, the son of Lucifer and Zuriel, the only female warrior angel until recently. Zuriel had fallen when Lucifer was banished from the clouds by his father, and she had bore Lucifer a son. No one knew if Zuriel had conceived before or after she had fallen, but one thing was for sure. The child’s power had caused Lucifer to lock him in a prison from the time of his birth. Now, Logan was free thanks to reapers Seph and Charon, who were forced to break Logan’s barrier. All anyone knew was Logan was bent on destroying Lucifer, and none of this could be good for anyone.

It was as if everyone held their breath waiting for the bomb to drop. And all needed to be prepared. Even though Cade was a fallen, he still hated to think of the nephilim being harmed.

He pushed through the front door.

“Dude!” Raze pulled Cade from his thoughts as he stormed down the corridor.

Abby flashed Raze a smile, and Cade had the sudden urge to beat the shit out of the younger angel.

“Raze.” She extended her hand. “What kind of angel are you?”

Raze flashed her a weary gaze as he scratched his jaw. “I’m a fallen warrior.” He looked at Cade, searching to see if he gave the correct answer.

Cade snorted. “Raze, it’s not a fucking test. For some reason, Miss All High and Mighty here has a serious dislike for us, brother.”

Raze’s blue eyes flashed with hurt. “What did we do to her?”

“We fell from grace.” They both looked at Abby, who stood in the middle of the room with her hands on her hips, and her mouth pressed into a thin line.

“I simply don’t understand why one of the others couldn’t have taught me to fight. Why did I need to come here to learn from those the Maker no longer claims as her own?” To add emphasis to her impatience, Abby began tapping her foot.

Abby’s features softened and her foot stilled. “I… I didn’t mean to hurt his feelings.”

Cade pondered if he should tell her that Raze was being an ass and could give two shits what others thought of him, and then decided to let her stew in her own shit. He shrugged. “Then stop being a bitch.” He witnessed her hazel eyes flash to green then back to copper. He had succeeded in pissing her off. Again. Training her was going to be one of the biggest challenges he had ever faced, but failure was not an option on his part or hers.

Get excerpts and more at https://valerietwombly.com/go/eternally-mated-series/

Award winning and bestselling author Valerie Twombly grew up watching Dark Shadows over her mother's shoulder, and from there her love of the fanged creatures blossomed. Today, Valerie has decided to take her darker, sensual side and put it to paper. When she is not busy creating a world full of steamy, hot men and strong, seductive women, she juggles her time between a full-time job, hubby and her two German Shepherd dogs, in Northern IL. Valerie is a member of Romance Writers of America and Fantasy, Futuristic and Paranormal Romance Writers. She is also the founder of Sexy Scribblers, a group of romance writers who bring readers new and fresh stories every month.

This site uses Akismet to reduce spam. Learn how your comment data is processed.