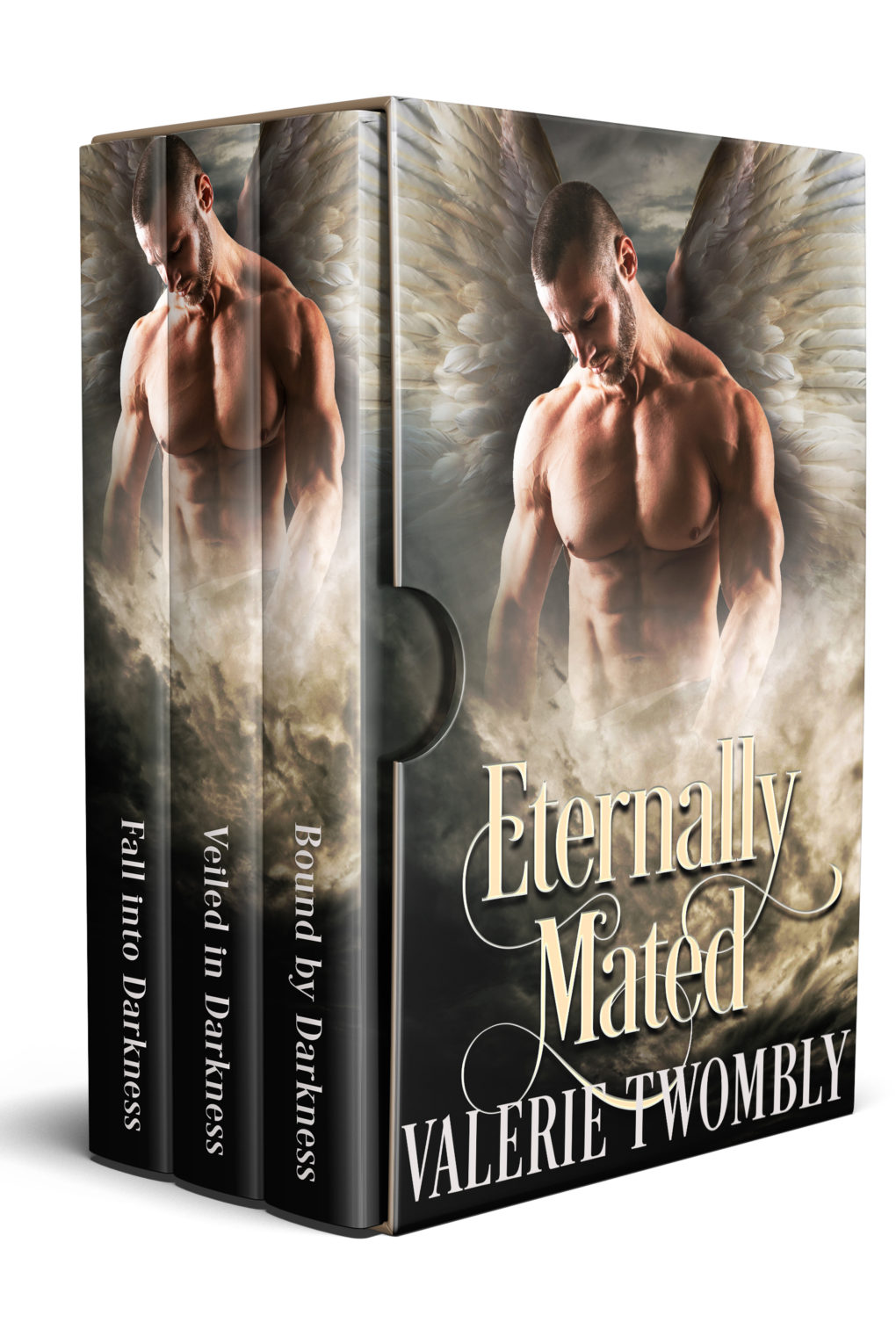 Part of the Eternally Mated series:

Angels With Attitude
Start the series and find out why paranormal fans are loving it.

Book 1: Fall Into Darkness
Hunter angel Eli lives by his own rules and bows to no one. But when a powerful council deems the angel has lost his humanity, he's sentenced to earth with one mission--learn compassion or be condemned to Hell.

Ashley has always been different. With one glance into a person's eyes, she foresees their death--so she tries not to look. She even moves to the wilds of Alaska to get away from civilization, which works just fine until a handsome stranger rescues her from a surprise attack.

Book 2: Veiled In Darkness
When Eli spots Ashley across a bloody battlefield, he can only steal a moment alone with her. Powerless is an emotion new to the hunter, but it’s one he faces daily when he realizes killing the demon king in order to free his mate is out of the question.

‘Death’ was not a nickname Ashley wished to carry. Being the only one able to stop Lucifer’s evil plan was an even worse fate. When she discovers her true ancestry, fear that she will succumb to her darker side forces her to dig deep for the strength she needs to fight.

Book 3: Bound By Darkness
He mated to protect her. She used him for revenge. As their worlds collide, their feelings for each other grow. But, when his dark secret is revealed, it may be more than she can forgive.

Lyzander has done many distasteful things in his life. One in particular has haunted him for the past twenty years. Now, the little girl he sheltered from the ones who killed her family has become his savior. When she seeks to avenge the murder of her loved ones, he finds himself saving her all over again.

Kelana has an agenda, and if mating with the angel warrior Lyzander will bring her closer to completing her mission, then she will gladly take him to her bed. When her father discovers the abomination he created is still alive, he proves more powerful than she imagined and it will take everything at her disposal to survive.

With 128 reviews
What Amazon readers are saying:

“Fall into Darkness was an incredible start to a new series. I was blown away by Eli and Ashley's story. These characters and storyline were brilliantly written. I would gladly Fall into Darkness again as long as Valerie Twombly is leading the way with another amazing story!!!”

“This story has a refreshing and HOT twist on Fallen Angels.”

“Dark, steamy, sultry romance! A whole new twist on Angels. It has you fanning yourself, the pages turning consistently, and drooling over muscular angels. What is a better way to spend your day?”

“Adventure, danger, suspense, romance, and of course a happily ever after with a miracle. Brava!!! Brava!!! I can't say enough good things about this series.”

“Omg! This was just, epic! Such a well thought out, well-written series! The first book was amazing, but this one....”

“This was more than I expected. We get tragic love stories, evil and prophecy all in one action-packed book that has you hanging in some respects and smiling in others.”

“Undeniable one of the best PNR books that really tugged on my heartstrings. By the end I was crying tears of both heartache and joy.”

“Holy Hell what a book! I love books by Valerie Twombly. The whole series was wonderful. So phenomenally well-written, and with a great flow.”