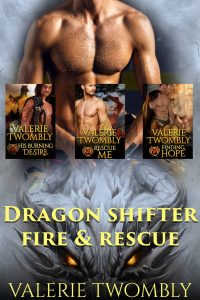 Fighting fires is in Derrick’s blood. Left shaken after the tragic loss of his best friend, the event forces him to realize he can’t afford to care. Love has cost him everything and the pain has him vowing to never suffer such heartache again. When he tries to start over in a small northern town, a beautiful woman steps into his life and pushes every boundary he sets in place.

Being a full-blooded dragon shifter makes Halee an anomaly among her kind. With her eldest brother pressuring her to choose a mate, her loyalties are torn. Turning to a stranger for the night, she hopes to forget the fate she must face. But when the stranger, Derrick, shows up as the new guy at the station, Halee must choose between duty and stability or a man whose kiss unleashes a passion she never realized existed.

Chance O’Connell doesn’t do romance. After the firefighter has his heart broken, his idea of a relationship consists of one night with no attachments. Somehow, the dragon shifter finds himself drawn to Hope, the waitress at the local diner. Rather than make her one of his conquests, he sits in her section and pretends he doesn’t want her.

Hope Sinclair is done with abusive men and being a victim. A new town and a new job at a local diner are all she needs for a fresh start. That is until a sexy firefighter takes up near residence in her section. He wants to be friends, but she wants something more. With the holiday bachelor auction coming up, Hope sets her heart on winning a date with Chance. 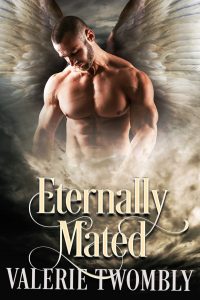 Angels With Attitude
Start the series and find out why paranormal fans are loving it.

Fall Into Darkness:
Hunter angel Eli lives by his own rules and bows to no one. But when a powerful council deems the angel has lost his humanity, he's sentenced to earth with one mission–learn compassion or be condemned to Hell.

Ashley has always been different. With one glance into a person's eyes, she foresees their death–so she tries not to look. She even moves to the wilds of Alaska to get away from civilization, which works just fine until a handsome stranger rescues her from a surprise attack.

Veiled In Darkness:
When Eli spots Ashley across a bloody battlefield, he can only steal a moment alone with her. Powerless is an emotion new to the hunter, but it’s one he faces daily when he realizes killing the demon king in order to free his mate is out of the question.

‘Death’ was not a nickname Ashley wished to carry. Being the only one able to stop Lucifer’s evil plan was an even worse fate. When she discovers her true ancestry, fear that she will succumb to her darker side forces her to dig deep for the strength she needs to fight.

Bound By Darkness:
He mated to protect her. She used him for revenge. As their worlds collide, their feelings for each other grow. But, when his dark secret is revealed, it may be more than she can forgive.

Lyzander has done many distasteful things in his life. One in particular has haunted him for the past twenty years. Now, the little girl he sheltered from the ones who killed her family has become his savior. When she seeks to avenge the murder of her loved ones, he finds himself saving her all over again.

Kelana has an agenda, and if mating with the angel warrior Lyzander will bring her closer to completing her mission, then she will gladly take him to her bed. When her father discovers the abomination he created is still alive, he proves more powerful than she imagined and it will take everything at her disposal to survive. 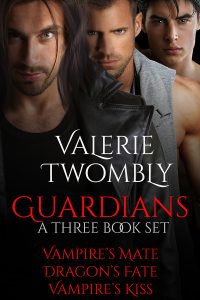 Caleb is dark, hot, and commanding in human form. As a dragon, he’s a force to be reckoned with. When he witnesses the slave Lileta being beaten by his Overlord Odage, he nearly comes unglued. Without understanding why, he asks to take Lileta as his own, but soon realizes his longing is more than an attraction to a beautiful woman. In a sick twist of fate, the gods have given him a demon as his mate—one he can never touch unless he wishes his own death.
His only choice is to grant her freedom.

Abducted as a teen, and later purchased by a dragon Overlord, Lileta’s venomous touch remains her only safeguard as a slave. When the demon’s rebellious nature brings about a brutal punishment, Caleb steps in and takes her as his own. As if having the sexy dragon save the day isn’t bad enough, she soon realizes they are destined to be together.
Mating is out of the question. 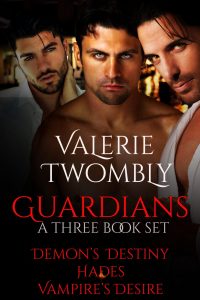 Demon’s Destiny:
Famed for his cocky attitude and womanizing lifestyle, Baal likes to make his own rules. But being the most powerful demon in Hades’ army comes with a steep price. Namely, a command to mate with the human he is bound to protect. When the lord of the Underworld reveals the female’s true identity, Baal vows he will never love her. Even though she may destroy him, he soon discovers it’s a promise he might not be able to keep.

Hades:
Being the lord of dark, terrifying things makes Hades the most feared god in existence. He’s also the most bored. When the guardians request his assistance, he is quick to grant it and make his way to the human realm. After all, creating havoc is what he does best. When his path crosses with a beautiful female, he finds her honesty refreshing, making his desire burn hotter. It’s when she summons him for a favor that he will finally get to name his terms.

Vampire’s Desire:
He does not trust her…

Lucan has one chance to save himself before the darkness he wields consumes him. The vampire would rather damn his soul to Hell, than mate his enemy’s sister. Fate hasn’t left him much choice however, because it prophesies Sabin to end the brutal war on humanity. The longer he waits, the further into the shadows he slips and the closer they all come to being destroyed.

She will betray him…

Sabin experiences daily torture ever since her brother locked her in his hellish dungeon. The only thing that keeps her sane, is the knowledge there is one vampire destined to save her. Even when Lucan rejects the idea they could ever become mated, she knows the fate of the world depends on them being together.

He is darkness; she is light, yet they need each other to survive. Evil is preparing to destroy Sabin, and with each passing second the enemy grows stronger. Time is running out and with the Phoenix God missing, Sabin cannot fulfill the prophesy. There may be only one sacrifice left to make.